Back To All Bank News 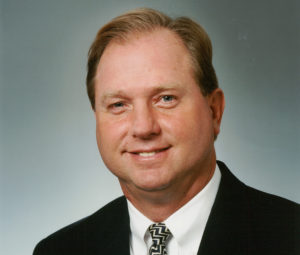 After nearly three decades as president of Legacy Bank, Frank Suellentrop has called it quits.

Suellentrop, who took over as president of what was then known as the State Bank of Colwich in 1991, retired from the position effective at the end of December. Brad Yaeger has since taken over as the seventh president in the bank’s 133-year history.

In all, Suellentrop, 65, has more than four decades of experience in the banking industry, all with the same institution.

“When you’ve done something that long, I think you’ll always have second thoughts about leaving,” Suellentrop says. “This was a plan, though, that had been in the works for a few years. I had set the Dec. 31, 2018, date and I stuck with it. I’m a believer that there’s a time when you have to give the next in line an opportunity.”

While it will be a change, Suellentrop won’t be going far. He will remain, he says, as chairman of the bank’s Board of Directors and he and his wife, Laura, will continue to reside in Colwich.

“I’ll be spending more time with my better half and we like to travel, so I’m sure we’ll be doing more of that,” Suellentrop says. “It’s not an easy thing to retire, but I think the bank is in good shape.”

“When I started as president in 1973, we had $13 million in assets. Today, we have about $440 million. That might not be a lot of growth to some, but we’ve had steady growth over the years. I feel like I’m going out on a high note.”

Suellentrop represents the fourth generation of his family to run the bank, dating all the way back to 1911. He says he briefly considered other lines of work while in college, but banking seemed like the right career path.

“I’m from Colwich and I figure they’ll probably bury me there,” Suellentrop says. “Growing up, I knew I wanted to stay and work in the community — be a part of the community. Being a part of a community bank offered me that chance. It’s safe to say that I have no regrets.”

Back in 2000, the institution changed its name from State Bank of Colwich to its current moniker.

“That wasn’t an easy decision for a lot of us,” Suellentrop says. “We knew, however, that we wanted to move into other communities, so we felt it was necessary.”

Legacy Bank currently has eight locations, including its branch in downtown Wichita at Douglas and Wabash that opened in 2017. Though Frank has stepped away from his day-to-day duties at the bank, the Suellentrop name remains as his son, Steven Suellentrop, serves as its assistant vice president of commercial lending.

The bank is also a past WBJ Family Business Award recipient.

View News Article
Get started - Open an account with us X